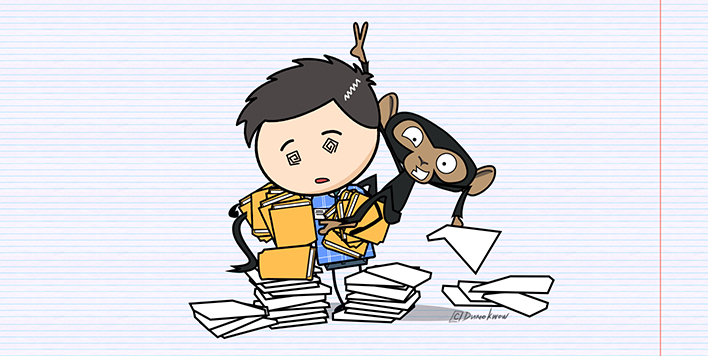 Who’s Got The Monkey? The Art Of Managing Your Management Time

Do you ever have a feeling that you’ve spent the entire day sorting out other people’s problems? Have you ever asked yourself the question ‘Why is it that I’m running out of time while my subordinates are running out of work?’; most likely you’ve encountered one of the fundamental problems of delegation and time management.

Try to recall a similar situation that happened to you. You’re on the way to make a cup of coffee when one of your employees stops you and says, ‘We’ve got a problem. Can I talk to you for a minute?’ You know enough about the problem and realize you should get involved but you can’t make a decision on the spot. So you say, ‘Let me think about it and I’ll get back to you.’

Do you see pitfalls in this scenario? The moment you take responsibility for the next move in order to resolve your subordinate’s problem, you start working for your subordinate. The ’next move’ is a ‘monkey’ that you’ve allowed to leap from his back onto yours. This is when the art of managing ‘monkeys’ can be handy.

The concept of Monkey Management was presented in a classic 1974 Harvard Business Review article by William Oncken Jr. and Donald L. Wass which is considered to be one of HBR’s most popular issues. The problem never gets old as most managers still spend a considerable amount of time dealing with their subordinates' problems instead of focusing on their own tasks.

How to get rid of the ‘monkey’?

Managers’ time can be divided based on 3 types of work they do:

The manager’s goal, say Oncken and Wass, is to minimize or eliminate subordinate-imposed work, get control of boss- and system-imposed work, and maximize discretionary time. The point is to have their subordinates take the initiative. When you encourage employees to handle their own ‘monkeys’, they acquire new skills - and you liberate time to do your own job. It’s initially more time consuming than tackling problems yourself but you’ll win in the long run.

How to maintain ‘monkeys’?

Oncken and Wass conclude by citing 5 rules on how to feed and take care of monkeys:

1. Monkeys should be fed or shot. Otherwise, they will starve to death and the manager will waste valuable time on post-mortems or attempted resurrections.
2. The monkey population should be kept below the maximum number the manager has time to feed. It shouldn’t take more than 5 to 15 minutes to feed a properly maintained monkey.
3. Monkeys should be fed by appointment only. The manager should not have to be hunting down starving monkeys and feeding them on a catch-as-catch-can basis.
4. Monkeys should be fed face-to-face or by telephone, but never by email. Documentation may add to the feeding process, but it cannot take the place of feeding.
5. Every monkey should have an assigned next feeding time and an agreed upon resolution outcome and date. These should never be vague or indefinite.

“Get control over the timing and content of what you do,” conclude Oncken and Wass. “The result of all this is that the manager will increase his leverage, which will in turn enable him to multiply, without theoretical limit, the value of each hour that he spends in managing management time.”

When you learn how to maintain ‘monkeys’ properly you will stop viewing your people as a source of your problems and will start seeing them as a major driving force for your company’s growth.

How do you handle ‘monkeys’? We’d love to know about your experience. Share your thoughts in the comments below.

About the author: Alla Berdnikova is a traveler and blogger who has been working as a project manager in non-governmental organisations and online startups for more than 4 years.